Thomas Kuhn, the famous philosopher of science, envisioned that scientific revolutions take place when “an increasing number of epicycles” arise, resulting in the untenability of a prevailing theory. Just in case you aren’t familiar, the “epicycles” are a reference to the Ptolemaic world-view with the earth at the center of the universe. To explain the trajectories of the other planets, Ptolemaic theory required that the planets circulate the earth in complicated trajectories called epicycles. These convoluted epicycles were no longer needed once the Copernican revolution took place, and it was realized that our solar system was heliocentric.

This post is specifically about the Gibbs paradox, which provided one of the first examples of an “epicycle” in classical mechanics. If you google Gibbs paradox, you will come up with several different explanations, which are all seemingly related, but don’t quite all tell the same story. So instead of following Gibbs’ original arguments, I’ll just go by the version which is the easiest (in my mind) to follow.

Imagine a large box that is partitioned in two, with volume V on either side, filled with helium gas of the same pressure, temperature, etc. and at equilibrium (i.e. the gases are identical). The total entropy in this scenario is

. Now, imagine that the partition is removed. The question Gibbs asked himself was: does the entropy increase?

Now, from our perspective, this might seems like an almost silly question, but Gibbs had asked himself this question in 1875, before the advent of quantum mechanics. This is relevant because in classical mechanics, particles are always distinguishable (i.e. they can be “tagged” by their trajectories). Hence, if one calculates the entropy increase assuming distinguishable particles, one gets the result that the entropy increases by

This is totally at odds with one’s intuition (if one has any intuition when it comes to entropy!) and the extensive nature of entropy (that entropy scales with the system size). Since the size of the larger container of volume

containing identical gases (i.e. same pressure and temperature) does not change when removing the partition, neither should the entropy. And most damningly, if one were to place the partition back where it was before, one would naively think that the entropy would return to

, suggesting that the entropy decreased when returning the partition.

The resolution to this paradox is that the particles (helium atoms in this case) are completely indistinguishable. Gibbs had indeed recognized this as the resolution to the problem at the time, but considered it a counting problem.

Lunar Eclipse and the 22 Degree Halo

The beautiful thing about atmospheric optics is that (almost) everyone can look up at the sky and see stunning optical phenomena from the sun, moon or some other celestial object. In this post I’ll focus on two particularly striking phenomena where the physical essence can be captured with relatively simple explanations. 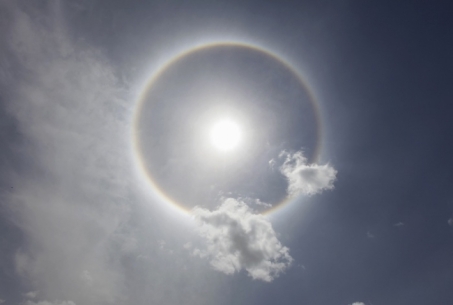 22 degree halo around the sun

22 degree halo around the moon

Note that the 22 degree halo is distinct from the coronae, which occur due to different reasons. While the coronae arise due to the presence of water droplets, the 22 degree halo arises specifically due to the presence of hexagonal ice crystals in the earth’s atmosphere. So why 22 degrees? Well, it turns out that one can answer the question using rather simple undergraduate-level physics. One of the most famous questions in undergraduate optics is that of light refraction through a prism, illustrated below:

But if there were hexagonal ice crystals in the atmosphere, the problem is exactly the same, as one can see below. This is so because a hexagon is just an equilateral triangle with its ends chopped off. So as long as the light enters and exits on two sides of the hexagon that are spaced one side apart, the analysis is the same as for the triangle.

Equilateral triangle with ends chopped off, making a hexagon

It turns out that

in Fig. 1 can be solved as a function of

It is then pretty straightforward to obtain

, the difference in angle between the incident and refracted beam as a function of

. I have plotted this below for the index of refraction of ice crystals for three different colors of light, red, green and blue (

Geometry of the lunar eclipse

The question I wanted to address is the reddish hue of the moon, despite it lying in the earth’s shadow. It would naively seem like the moon should not be observable at all. However, there is a similar effect occurring here as with the halo. In this case, the earth’s atmosphere is the refracting medium. So just as light incident on the prism was going upward and then exited going downward, the sun’s rays similarly enter the atmosphere on a trajectory that would miss the moon, but then are bent towards the moon after interacting with the earth’s atmosphere.

But why red? Well, this has the same origins as the reddish hue of the sunset. Because light scatters from atmospheric particles as

, blue light gets scattered away much more easily than red light. Hence, the only color of light left by the time the light reaches the moon is primarily of red color.

It is interesting to imagine what the earth looks like from the moon during a lunar eclipse — it likely looks completely dark apart from a spectacular red halo around the earth. Anyway, one should realize that Snell’s law was first formulated in 984 by Arab scientist Ibn Sahl, and so it was possible to come to these conclusions more than a thousand years ago. Nothing new here!

Posted on September 9, 2016 by Anshul Kogar | Leave a comment

. Measurements of the frequency of the AC current in a Josephson junction give us a frequency of

times the applied voltage. Hydrodynamic circulation in liquid 4He is quantized in units of

. These measurements (and similar ones like flux quantization) are remarkable. They yield fundamental constants to a great degree of accuracy in a condensed matter setting– a setting which Murray Gell-Mann once referred to as “squalid state” systems. How is this possible?

At first sight, it is stunning that physics of the solid or liquid state could yield a measurement so precise. When we consider the defects, impurities, surfaces and other imperfections in a macroscopic system, these results become even more astounding.

So where does this precision come from? It turns out that in all cases, one is measuring a quantity that is dependent on the single-valued nature of the (appropriately defined) complex scalar  wavefunction. The aforementioned quantities are measured in integer units,

, usually referred to as the winding number. Because the winding number is a topological quantity, in the sense that it arises in a multiply-connected space, these measurements do not particularly care about the small differences that occur in its surroundings.

For instance, the leads used to measure the quantum Hall effect can be placed virtually anywhere on the sample, as long as the wires don’t cross each other. The samples can be any (two-dimensional) geometry, i.e. a square, a circle or some complicated corrugated object. In the Josephson case, the weak links can be constrictions, an insulating oxide layer, a metal, etc. Imprecision of experimental setup is not detrimental, as long as the experimental geometry remains the same.

Another ingredient that is required for this precision is a large number of particles. This can seem counter-intuitive, since one expects quantization on a microscopic rather than at a macroscopic level, but the large number of particles makes these effects possible. For instance, both the Josephson effect and the hydrodynamic circulation in 4He depend on the existence of a macroscopic complex scalar wavefunction or order parameter. In fact, if the superconductor becomes too small, effects like the Josephson effect, flux quantization and persistent currents all start to get washed out. There is a gigantic energy barrier preventing the decay from the

current-carrying state to the

In the quantum Hall effect, the samples need to be macroscopically large to prevent the boundaries from interacting with each other. Once the states on the edges are able to do that, they may hybridize and the conductance quantization gets washed out. This has been visualized in the context of 3D topological insulators using angle-resolved photoemission spectroscopy, in this well-known paper. Again, a large sample is needed to observe the effect.

It is interesting to think about where else such a robust quantization may arise in condensed matter physics. I suspect that there exist similar kinds of effects in different settings that have yet to be uncovered.

On Science and Meaning

Posted on September 6, 2016 by Anshul Kogar | Leave a comment

The history of science has provided strong evidence to suggest that the humanity’s place in the universe is not very special. We have not existed for very long in the history of the universe, we are not at the center of the universe and we likely will not exist in the future of the universe. This kind of sentiment can seem depressing to some, as can be seen in the response to the video made by Neil DeGrasse Tyson and MinutePhysics:

It appears that such ideas can make human life and our actions here on earth (and beyond) seem rather meaningless. As I have referenced in a previous post, this can especially be true for graduate students! However, on a more serious note, I would contend the exact opposite.

Because life on earth is so fragile and transient and only exists in some far-flung corner on the universe, the best thing we can hope to do as humans is celebrate our existence through acts of exploration, beauty, creation, truth and acts that enrich the lives of others and our environment.

When working in the lab or on a calculation that requires attention to small details, this larger context is often forgotten. To my mind, it is important not to lose sight of the basic reason why we are there in the first place, which is all too easy to do. The universe can seem meaningless, but not so when she lets us peer into her depths, usually revealing order of spectacular beauty.

I apologize if this post comes off as a little preachy or pretentious– I suspect I am really the one that needed this pep talk.