Recently, a lab-mate of mine asked me if there was an intuitive way to understand Brewster’s angle. After trying to remember how Brewster’s angle was explained to me from Griffiths’ E&M book, I realized that I did not have a simple picture in my mind at all! Griffiths’ E&M book uses the rather opaque Fresnel equations to obtain the Brewster angle. So I did a little bit of thinking and came up with a picture I think is quite easy to grasp.

First, let me briefly remind you what Brewster’s angle is, since many of you have probably not thought of the concept for a long time! Suppose my incident light beam has both components, s– and p-polarization. (In case you don’t remember, p-polarization is parallel to the plane of incidence, while s-polarization is perpendicular to the plane of incidence, as shown below.) If unpolarized light is incident on a medium, say water or glass, there is an angle, the Brewster angle, at which the light comes out perfectly s-polarized.

An addendum to this statement is that if the incident beam was perfectly p-polarized to begin with, there is no reflection at the Brewster angle at all! A quick example of this is shown in this YouTube video:

So after that little introduction, let me give you the “intuitive explanation” as to why these weird polarization effects happen at the Brewster angle. First of all, it is important to note one important fact: at the Brewster angle, the refracted beam and the reflected beam are at 90 degrees with respect to each other. This is shown in the image below: 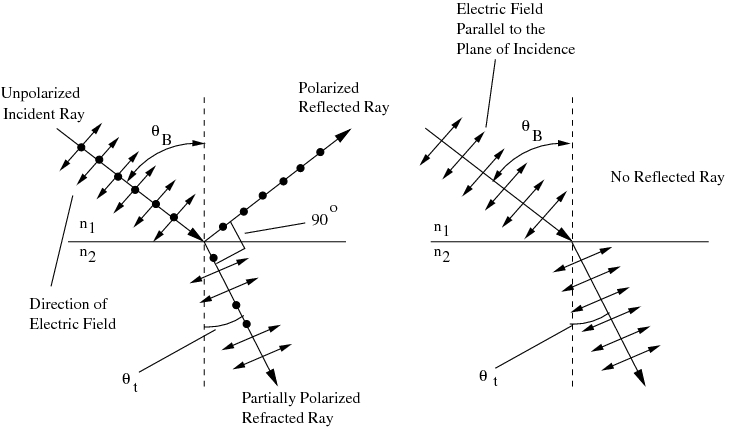 However, radiation from an oscillating charge only gets emitted in directions perpendicular to the axis of motion. Therefore, when the light is purely p-polarized, there is no light to reflect when the reflected and refracted rays are orthogonal — the reflected beam can’t have the polarization in the same direction as the light ray! This is shown in the right image above and is what gives rise to the reflectionless beam in the YouTube video.

This visual aid enables one to use Snell’s law to obtain the celebrated Brewster angle equation:

The equations also suggest one more thing: when the incident light has an s-polarization component, the reflected beam must come out perfectly polarized at the Brewster angle. This is because only the s-polarized light jiggles the electrons in a way that they can re-radiate in the direction of the outgoing beam. The image below shows the effect a polarizing filter can therefore have when looking at water near the Brewster angle, which is around 53 degrees for water.

To me, this is a much simpler way to think about the Brewster angle than dealing with the Fresnel equations.

6 responses to “An Undergraduate Optics Problem – The Brewster Angle”