Most people who study solid state physics are told at some point that in a totally pure sample where there is no scattering, one should observe an AC response to a DC electric field, with oscillations at the Bloch frequency (

). These are the so-called Bloch oscillations, which were predicted by C. Zener in this paper.

However, the actual observation of Bloch oscillations is not as simple as the textbooks would make it seem. There is an excellent Physics Today article by E. Mendez and G. Bastard that outline some of the challenges associated with observing Bloch oscillations (which was written while this paper was being published!). Since the textbook treatments often use semi-classical equations of motion to demonstrate the existence of Bloch oscillations in a periodic potential, they implicitly assume transport of an electron wave-packet. To generate this wave-packet is non-trivial in a solid.

In fact, if one undertakes a full quantum mechanical treatment of electrons in a periodic potential under the influence of an electric field, one arrives at the Wannier-Stark ladder, which shows that an electric field can localize electrons! It is this ladder and the corresponding localization which was key to observing Bloch oscillations in semiconductor superlattices.

Let me use the two-well potential to give you a picture of how this localization might occur. Imagine symmetric potential wells, where the lowest energy eigenstates look like so (where S and A label the symmetric and anti-symmetric states): 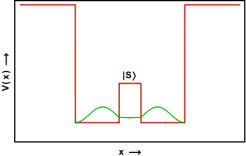 Now, imagine that I start to make the wells a little asymmetric. What happens in this case? Well, it turns out that that the electrons start to localize in the following way (for the formerly symmetric and anti-symmetric states):

! The potential is shown schematically below. It is also shown that as the potential wells slant more and more (i.e. with larger electric fields), the wavefunctions become more localized (the image is taken from here (pdf!)): 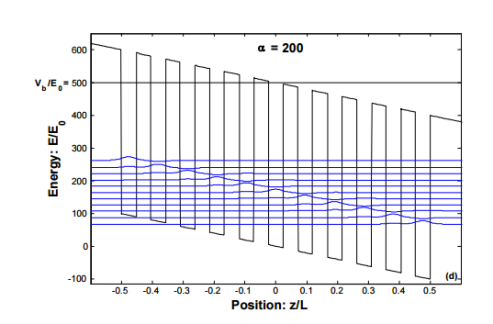 , but much like the quantum harmonic oscillator (where the levels are split by

), nothing is actually oscillating until one has a wavepacket (or a linear superposition of eigenstates). Therefore, the Bloch oscillations cannot be observed in the ground state (which includes the the applied electric field) in a semiconducting superlattice since it is an insulator! One must first generate a wavepacket in the solid.

, which scales with the width of the quantum well, needs to be fast enough that the electrons don’t scatter from impurities and phonons. Here is the famous plot from the aforementioned paper showing that the frequency of the emitted radiation from the Bloch oscillations can be tuned using an electric field: 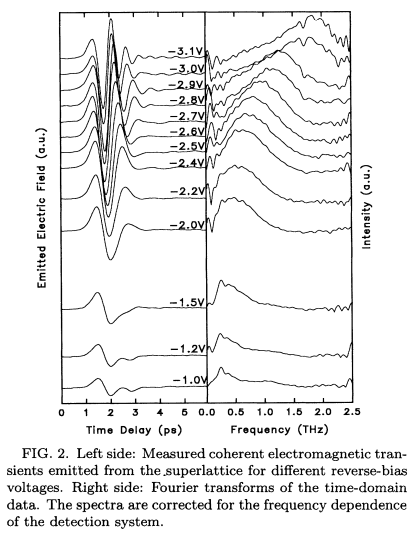 This is a pretty remarkable experiment, one of those which took 60 years from its first proposal to finally be observed.