If you keep slowly increasing the frequency of your swing beyond the resonance frequency, you’ll see that the keys don’t swing up as high. Also, you will notice that the keys now seem to be swaying out of phase with your hand (i.e. your hand is going in one direction while the keys are moving in the opposite direction!). This change of phase by 180 degrees between the driving force and the position of the oscillator is a ubiquitous feature of damped harmonic motion at frequencies higher than the resonance frequency. Why does this happen?

To understand this phenomenon, it helps to write down the equation for damped, driven harmonic motion. This could be describing a mass on a spring, a pendulum, a resistor-inductor-capacitor circuit, or something more exotic. Anyway, the relevant equation looks like this:

Let’s describe in words what each of the terms means. The first term describes the resistance to change or inertia of the system. The second term represents the damping of the system, which is usually quite small. The third term gives us the pullback or restoring force, while the last term on the right-hand side represents the external driving force.

With this nomenclature in place, let’s move on to what actually causes the phase change. First, we have to turn this differential equation into an algebraic equation by doing a Fourier transform (or similarly assuming a sinusoidal dependence of everything). This leaves us with the following equation:

Now we can more easily visualize what is going on if we concentrate on the left-hand side of the equation. Note that this equation can also suggestively be written as:

, we see that the restoring term is the largest. The phase difference can then be represented graphically on an Argand diagram, where we can draw the following picture: 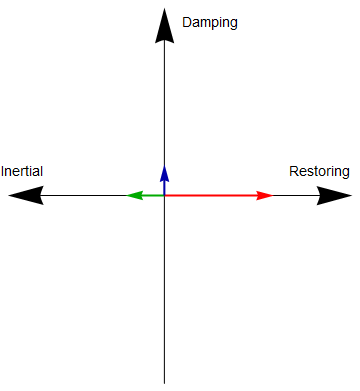 Therefore, the restoring force dominates the other two terms and the phase difference between the external force and the position of the oscillator is small (approximately zero).

At resonance, however, the driving frequency is the same as the natural frequency. This causes the restoring and inertial terms to cancel each other out perfectly, resulting in an Argand diagram like this: 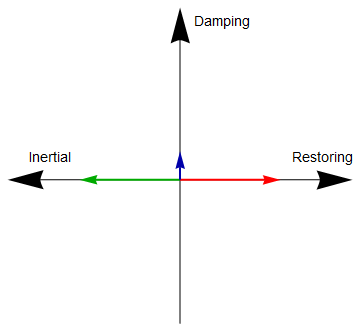 After adding the vectors, this results in the arrow pointing upward, which is equivalent to saying that there is a 90 degree phase difference between the driving force and position of the oscillator.

You can probably see where this is going now, but let’s just keep going for the sake of completeness. For the case where the driving frequency exceeds the natural frequency (or resonant frequency),

, we see that the inertial term starts to dominate, resulting in a phase shift of 180 degrees. This is again can be represented with an Argand diagram, as seen below: 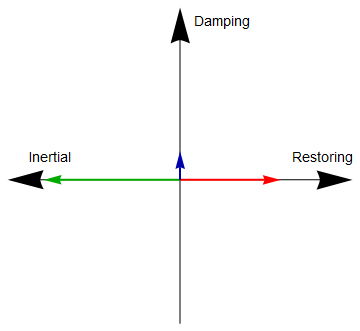 This expresses the fact that the inertia can no longer “keep up” with the driving force and it therefore begins to lag behind. If the mass in a mass-spring system were to be reduced, the oscillator would be able to keep up with the driver up to a higher frequency. In summary, the phase difference can be plotted against the driving frequency to yield: 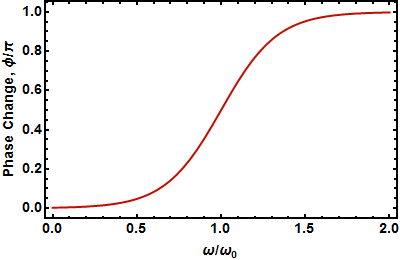 This phase change can be observed in so many contexts that it would be near impossible to list them all. In condensed matter physics, for instance, when sweeping the incident frequency of light in a reflectivity experiment of a semiconductor, a phase difference arises between the photon and the phonon above the phonon frequency. The problem that actually brought me to this analysis was the ported speaker, where above the resonant frequency of the speaker cone, the air from the port and the pressure wave generated from the speaker go 180 degrees out of phase.

The goal of an audio speaker is to reproduce the sound of the input as best as possible. This may sound like a simple statement, but it is a notoriously difficult one to engineer. Furthermore, sound to peoples’ ears is subjective, which only serves to complicate this task.

Today, with currently available technology, it is not possible to reproduce a flat frequency response across the entire spectrum of sound within the human-audible regime (i.e. ~20Hz to ~20kHz) with a single driving cone. This is why a decent set of speakers usually comprise two or more components, for example, a sub-woofer and a tweeter. The sub-woofer plays low-frequency sound, while the tweeter plays the high-frequency sound, which you would probably guess just from the onomatopoeic value of their names. Here is an example of a sound pressure level vs. frequency graph for this sub-woofer: 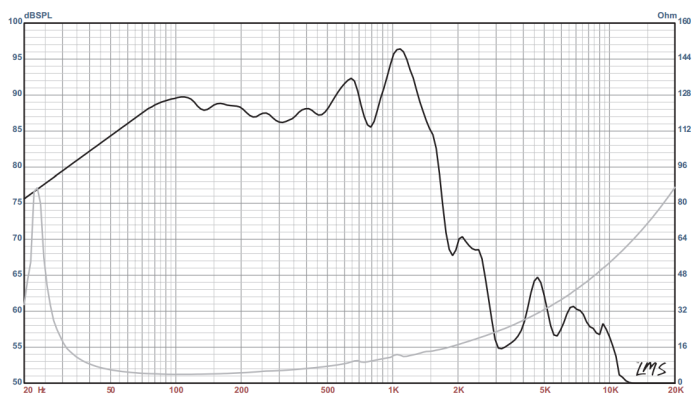 You can see that the sound level dies off dramatically at higher frequencies, which is why we need the tweeter. For those that are curious, the plots like the one above are usually obtained by hanging a microphone in front of the speaker cone in an anechoic chamber and sweeping through the frequencies with a frequency generator. Due to the directional nature of sound from a speaker, the microphone is hung directly in front of the cone at a distance of 1 meter.

Because sound has to be routed through two separate cones, the speaker manufacturer has to make an electronics decision about how to do this. The electronics components that are used to do this are usually referred to as the “crossover circuit”. This is really just a fancy name for a high- and low-pass filter (or band-pass filter if one is also using a mid-range speaker). Crossover circuits tend to come in two varieties: active and passive. Active crossovers usually use operational amplifiers (or op-amps) to make the filters (which require the use of external power), while passive crossovers use inductors and capacitors (and do not need to be plugged into the wall).

For the sake of simplicity, let’s suppose that we have both 8 Ohm tweeters and sub-woofers for our speaker system. Suppose we want our cross-over frequency to be 500Hz. We can make the world’s simplest high-pass filter like so for the tweeter: 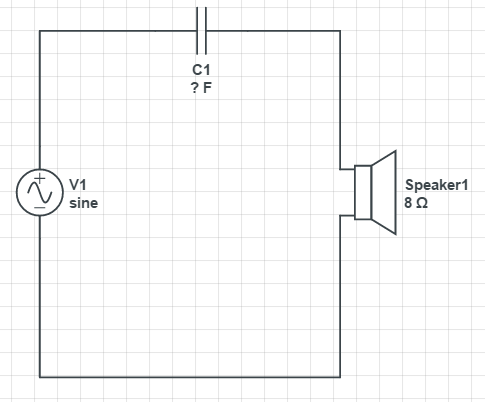 So what would the capacitance need to be? Well, simply enough, it’s just the cut-off frequency of an RC circuit. In this case, for the 500 Hz crossover, we can calculate it as so:

For the sub-woofer’s low-pass filter, we would replace the capacitor with the inductor and the equation would be

. I should mention that these simple circuits also give one a 6dB/octave rolloff. This point is explained well on Wikipedia, so I don’t think I need to repeat it here.

The stunning thing about this simple passive crossover is that manufacturers can make a set of pretty high-end speakers with just these circuits. Of course, one would have to use some reasonable capacitors and inductors — but it can be that simple.

Manufacturers have many other design considerations besides the electronics to make as well (such as the enclosure!), but I hope this helps you understand the basics of what’s inside your speaker box.