Landau Theory and the Ginzburg Criterion

The Landau theory of second order phase transitions has probably been one of the most influential theories in all of condensed matter. It classifies phases by defining an order parameter — something that shows up only below the transition temperature, such as the magnetization in a paramagnetic to ferromagnetic phase transition. Landau theory has framed the way physicists think about equilibrium phases of matter, i.e. in terms of broken symmetries. Much current research is focused on transitions to phases of matter that possess a topological index, and a major research question is how to think about these phases which exist outside the Landau paradigm.

Let me give an example of its failure before discussing how it predicts its own demise. Landau theory predicts that the specific heat should exhibit a discontinuity like so at a phase transition: 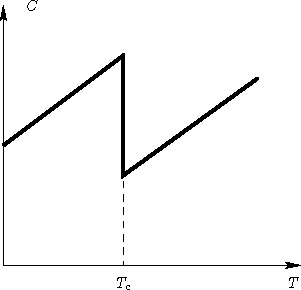 However, if one examines the specific heat anomaly in liquid helium-4, for example, it looks more like a divergence as seen below:

is the error in Landau theory,

quantifies the fluctuations and

is the order parameter. Basically, if the error is small, i.e.

, then Landau theory will work. However, if it approaches

, Landau theory begins to fail. One can actually calculate both the order parameter and the fluctuation region (quantified by the two-point correlation function) within Landau theory itself and therefore use Landau theory to calculate whether or not it will fail.

If one does carry out the calculation, one gets that Landau theory will work when:

is the reduced temperature,

is the dimensionless mean-field correlation length at

(extrapolated from Landau theory) and

is the change in specific heat in units of

, which is usually one per degree of freedom. In words, the formula essentially counts the number of degrees of freedom in a volume defined by

. If the number of degrees of freedom is large, then Landau theory, which averages the interactions from many particles, works well.

So that was a little bit of a mouthful, but the important thing is that these quantities can be estimated quite well for many phases of matter. For instance, in liquid helium-4, the particle interactions are very short-ranged because the helium atom is closed-shell (this is what enables helium to remain a liquid all the way down to zero temperatures at ambient conditions in the first place). Therefore, we can assume that

and deviations from Landau theory can be easily observed in experiment close to the transition temperature.

Despite the qualitative similarities between superfluid helium-4 and superconductivity, a topic I have addressed in the past, Landau theory works much better for superconductors. We can also use the Ginzburg criterion in this case to calculate how close to the transition temperature one has to be in order to observe deviations from Landau theory. In fact, the question as to why Ginzburg-Landau theory works so well for BCS superconductors is what awakened me to these issues in the first place. Anyway, we assume that

particles in this volume and correspondingly,

and Landau theory fails so close to the transition temperature that this region is inaccessible to experiment. Landau theory is therefore considered to work well in this case.

For high-Tc superconductors, the Cooper pair size is of order

and therefore deviations from Landau theory can be observed in experiment. The last thing to note about these formulas and approximations is that two parameters determine whether Landau theory works in practice: the number of dimensions and the range of interactions.

*Much of this post has been unabashedly pilfered from N. Goldenfeld’s book Lectures on Phase Transitions and the Renormalization Group, which I heartily recommend for further discussion of these topics.